I think it would be fair to say, that I do indeed spend a more than healthy amount of time in a state of irritability. I don’t really want to, I would genuinely much rather be ‘Happy go lucky’ but there is something deep down in my core, that just finds something irritating about most things.
What is worse, is that I seem to have been even more tetchy than normal just recently. I don’t have any concrete evidence as to why this is, but maybe it has something to do with the onset of winter, the cold, the grey skies as far as the eye can see, what seems to be constant drizzle, and probably worst of all, the darkness.

Anyway, putting all that to one side, I thought I would just do a quick review of what has been occurring recently in this mad mad mad mad world.

I read today that scientists now tell us that the hole in the ozone layer is protecting the Antarctic from global warming. For God’s sake make your minds up chaps will you. In fact a message to the whole scientific community, until you have something that is actually interesting, relevant, meaningful and useful to say, please shut the fuck up. It wouldn’t be so bad if they stuck to their guns, but eating toast last week prolonged your life by a decade, this week it gives you cancer!

Scientists do get on my nerves actually. They can be so bloody arrogant. "If I haven’t seen it through my electron microscope, or if it hasn’t happened under laboratory conditions, it doesn’t exist." Brilliant, that is about as blinkered and narrow minded as any religious zealot.

The bloody mindedness of science, can be just as silly as any religious fundamentalism. The big bang theory thing always gets me. If you ask them what was"there" before the big bang, their reply is……."Er, nothing." Brilliant, that’s it is it? Just nothing eh?, years at Harvard for that.

I am of course being a bit silly, science has given us some truly wondrous products and discoveries, I think my bitterness towards them stems from their reluctance to invent a useable personal jet pack…….I want one.......really really want one.

Liverpudlians. I can’t bare them. Yes every one of them, yes I know that is a ridiculous sweeping statement, but arse to it, let’s sweep away. My God they have a high opinion of themselves don’t they? "Salt of the earth this", "salt of the earth that," a sense of humour second to none. Really? let me just say Stan Boardman and Tom O’Conner, I don’t think so.
That bloody accent, in my opinion the worst accent of the British Isles. A whiney, lilting, phlegm inducing noise. Thank God the vast majority of them can’t string more than a few words together. "You know what I meeeeeeean likcccccccccckkkkkkkkke." Arghh, please make it stop.

Horrible human beings stomp around the planet, culling defenceless baby seals, killing elephants for their ivory, to make into obscene trinkets for other disgraceful human beings to buy. Pointlessly slaughter whales, and wipe out entire species. What the fuck are we doing? Let all of those beautiful creatures live, and turn your hateful vengeance on to Liverpudlians! YES, lets cull scousers. Your average baseball cap wearing, smelly tracksuit donning, stolen mobile phone using, dangerous dog wielding, benefit scrounging feckless scouser is a much more deserving target for your blood lust.

Leave the gorillas alone, Let that tiger be. Instead turn your attention to the council estates of Liverpool! Animal welfare people should be sent in to collect all of the "Dangerous dogs" (They can all come and live with Miss Marple and me, we will see how "dangerous" they are, once they have been festooned with love, care and proper attention) and then teams of ‘Purifiers’ should March through scumsville, flamethrowring any pointless chavs they find. Flush them out of their stinking pits. Let’s see how much ‘Darren’ liccccccccccccccccccckkkkkkkkkes it with an arse full of machine gun fire! Hitler wasn’t all bad ya know, he just got carried away!

While we are on the subject of animals, a week or so ago, what can only be described as a "fucking stupid cunt" scaled the twenty foot high wall of a bear enclosure at some zoo or other. He wanted to get up close and personal with the bear, to get some better photographs! Because he was a complete dolt, he had failed to realize that this bear, although in captivity, was to all intents and purposes a wild animal. The bear proceeded to maul him, until the authorities shot it. Why didn’t they shoot the moronic cretin instead?

Our plasmas are plastered with reality TV at the moment, it is that time of year. I still cry with frustration and despair on a daily basis, due to the fact that vast swathes of the "Great" British public are still under the illusion that the ‘X FACTOR’ is a singing competition.

‘I’m a non entity, get me out of here’ rots the fabric of society this time of year as well. Thankfully I can resist being sucked into this one, but one can’t help catching the odd snippet from newspapers and TV. I will never cease to be amazed at how spoilt and precious your average fucking celebrity is. Some woman (I have no idea who she is) Left the "Jungle" after a couple of days, due to exhaustion, depression, and mal nutrition or something. FOR FUCKS SAKE!!!!!!!!!!!!..................Can a human being possibly get anymore pathetic than that? If they had genuinely been dropped into a real jungle, two hundred miles from civilization, and if they really had to catch their own food, fend for themselves etc, you could possibly understand it. But we all know it’s about as much a "real" jungle as my fucking potting shed. Just out of camera shot there are doctors, councilors, manicurists, agents, lawyers, life coaches, assistants, dietitians etc etc etc. If you can’t hack sitting round in a glorified greenhouse surrounded by all that little lot for a couple of weeks, then quite frankly you deserve to be left in the fucking jungle…….for real!

I think the thing (And I mean "Thing") that sums it all up, is Jordan, or Katie Price or whatever she is fucking called this week. The producers of the show, realizing that nobody knew who any of the ‘celebrities’ were, decided to make "it" an offer that "it" couldn’t refuse, in order to try and boost the all important ratings. So for the obscene figure of three hundred and fifty thousand pounds, "It" swanned into the jungle to "save" the show.

After seven days of being voted by the public to do the ‘Bush tucker trials’ "It" announced that "it" would be leaving. "It" apparently said "I can’t understand why the public keep picking on me!" ……. No amount of slack jaws, raised eyebrows, or exclamation marks would ever be enough to cope with that quote. But with extreme grace, "it" agreed to knock off one hundred thousand pounds of "it’s" fee for quitting early. Bless.

There is a black bloke who sometimes does the weather on the BBC in the mornings, who is getting on my nerves. I am not a morning person, sometimes I am barely a person at all, but in the mornings I am usually bleary eyed, sometimes a bit hung over, but always grumpy. That bloody Carol Kirkwood is bad enough with her overly cheery "Morning" but this guy is curdling the milk on my sugar puffs. He bounces around in front of the map, and he has started doing those hand gestures, you know the one’s that hip hoppers do. Throwing his hand out towards the camera as he tells me "it’s gonna rain in da east today." All the while bouncing. His other hand reaches up and moves down across his body as he says "You guys in da West r gonna ‘av it fine." Still bouncing. "Up in Scoterlannnnnnnd you mudders gonna get one bitch load a snow…….mmm mmm."

Look BBC, if I wanted ‘Huggy Bear’ forecasting the weather, I would go to channel five ok. Because the BBC pride themselves on being "Right on" and "Down wi da kids" and all that, they are letting this guy have a free reign. What is he going to do next? I am fully expecting to be wearily munching on my burnt toast one morning soon, and ‘anchor man’ bloke will say "And now the weather."

A kicking hip hop groove will strike up, and ‘MC Wedder boy’ will slide into shot doing a bit of ‘beat boxing’. At the same time a couple of bootilicious soul sisters will funk their way onto the set. Standing one either side of him, they will thrust their leopard skinned booties towards the camera, as ‘MC’ starts to rap the weather!.......

Yo yo all yo mudders out there, is it gonna rain, or will it be fair.

I’m MC Wedder boy at yo service, wit da aid of ma bitches and young
Curtis (Cut to shot of kid spinning on his head)

Scoterland wales and norten Ireland, will start off dull, but then will brighten.

All my homies in da home counties, yo rely on me, I put ma money where ma mout is.

If the BBC has now entered a period of "Non Traditional Weather forecasting" lets have some more examples shall we? Let’s have Mustafa the Muslim Fundamentalist forecaster……

Many London residents will wake to find a plague of locusts descending upon the capital city today – HOME OF THE INFADELS! - God’s divine wind will sweep in from the east, and cleanse the land of the impurities of the west. Looking forward to the long term forecast, I predict rain for forty days and for forty nights, followed by an upsurge of hot air from the Middle East. Goodnight.

Anchor man – So Winston, what does the weather have in store for us today?

Perhaps our weather forecasters aren’t gay enough. Perhaps we should have Justin doing the weather. I would like to see him mince on to the weather girls "It’s raining men."

"Ooh ‘ello. Ooh my lovelies it’s going to be wet today. Plenty of showers, but not golden one’s we ‘ope, eh? (cackles) ooh take no notice of me. If I am to believe what my fellow forecaster Julian tells me, I’ll need to prepare myself for a severe stiff one from the south tonight…….eh! Oh and don’t talk to me about the snow up north, I could be up to my eyeballs in soggy white stuff before I know it, nothing new there love, eh! Oooooh. Well that’s all from me, ill catch you later, I can feel a breeze around the Urals.

What was wrong with Michael Fish? He may not have got the weather forecast right, but there was a certain stiff upper lip about it all. Having said that, I notice that he has made a bit of a comeback on GMTV and even he is being a bit off hand, flippant, and down wid da kids! Where will it all end?.......
Posted by Andy Mule at 09:15 No comments: 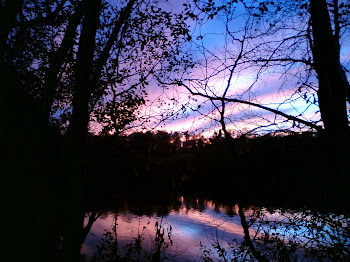